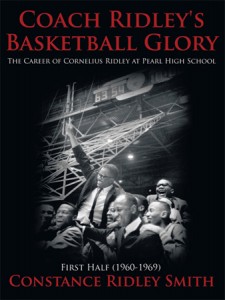 The game was basketball. The issue was equality. The Nashville community was victorious. It was a time of Basketball Glory.

The game was between the Father Ryan Fighting Irish and the Pearl High Tigers. Ryan wins over Pearl 52-51 with a last second shot by Jack Dempsey.

This proved that Negro teams and white teams could play alongside each other without incidence. The game was a win for the Nashville community. The next years Tennessee High School sports became integrated. Tennessee High schools followed suit.

Basketball catalyzed the movement. This was Basketball Glory. The game drew a crowd of 8,300 fans.

One man's passion for basketball catalyzed a movement that could not be contained within the parquet court. The game was basketball. The issue was equality. The entire community was victorious. It was a time of Basketball Glory. The full account of Pearl High Basketball from 1960-1982 spans the career of my dad, Coach Cornelius Ridley, head basketball coach. It contains two volumes:

First Half highlights the centerpiece of Pearl's history, which was made by the 1965-66 basketball team. In this era, Tennessee High Schools were segregated. Schools like Pearl were "All Negro" until 1967 when the first Caucasian teacher arrived. First Half highlights that the centerpiece of Pearl's history was made by the 1965-66 basketball team. That team won the TSSAA State Championship in the first year that Negroes were allowed to play in it. The historical account of that event is contained in this book, "First Half."

Constance Ridley Smith is an American resident of the lovely island of Bermuda.

"Constance, you nailed it. This is just the right mix--thoroughly researched, analytically sound, but with a special personal touch that just couldn't be added by others. This is going to be a very important book." — Attorney Perry Wallace, 2010 Co-Captain of the PHS 1966 Basketball Team; Current Professor of Law and Director of the JD/MBA Program, Washington College of Law, American University

“Smith deftly alternates between depicting the outstanding basketball program and the man who brought its excellence to the fore. This, in turn, is skillfully interwoven into the school’s rich history, complete with portrayals of dedicated educators and cohesive neighborhoods. The author’s analysis and quality research blends well with her personal touch. Basketball fans and archival buffs alike will appreciate the proficient use and display of news articles, interviews, photos, letters, box scores and even Western Union telegrams.”

Buy from our website and receive free shipping. Also, by selecting this payment option you will be contributing to our scholarship fund that is awarded at the end of each calendar year.

Find us elsewhere on the web. Tell your friends about this book.