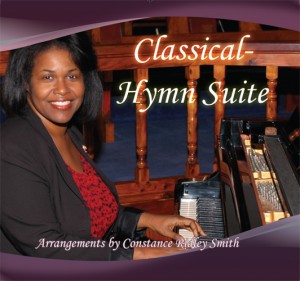 Each selection combines a well-known classical piece (CD only)

Each selection in the Classical-Hymn Suite combines a well-known classical piece with a traditional hymn. Through interplay, partner songs, and counter melodies, these selections appeal to those who love the hymns and are familiar with classical melodies. Good for meditation and promoting inner peace through the use of music.

*Update: The ability to download tracks will be available soon!

Track #3: Adagio Cantabile / All The Way My Savior Leads Me

Track #4: Liebestraum / It Is Well With My Soul

Track #6: Revolutionary Etude / Nothing Between My Soul and the Saviour

Constance began studying piano at age 7. From age 8 she studied with Charlotte Scott Rhodes, a graduate of the Cincinnati Conservatory of Music in Cincinnati, Ohio.

Constance studied music on the university level, graduating with University Honors and with distinction from Tennessee State University with a Bachelor of Science Degree in Music Education, Piano Concentration.

She has refined her technique through further study with Eugene and Elizabeth Pridinoff, Steinway artists and members of faculty at the Cincinnati Conservatory of Music, the Amalfi Coast Music Festival, and the Forum Internacional de Musica Barcelona Ciutat. She has studied traditional gospel with Lady Corder Chapman and contemporary gospel with keyboardist extraordinaire, Marvin Pitcher.

Constance has always loved the music of the flute. At age 21 Constance purchased her first flute and began to teach herself to play it. Her formal study of the flute began at Wayne State University. She later took lessons with Nashville Symphony Orchestra flautist Norma Rogers at Nashville’s Blair Academy.

Known in Bermuda for his ‘singing flute,’ Michael Taylor has performed throughout the island and in the United States for many years. Michael is sought after to play for weddings, funerals, and church services, but he has also played in the Bermuda Philharmonic, the Bermuda Regiment, Brass Praise, and Bermuda’s North Village Band.

Discipline, dedication, and diligence are terms that Bandmaster Kenneth “Tokey” Dill uses to describe Michael Taylor’s approach to his music. Michael was taught flute and theory by Bandmaster Dill while he was a member of the Bermuda Regiment Band. During this time, Michael earned Grade V in the Royal Schools of Music External Exams.

Michael also studied under Erskine Doers of the North Village Band. Ghandi Burgess, Stephen Rawlinson, Lloyd Williams, and the late Michael Cann also contributed to Michael Taylor’s musical development. His technique and creativity have been inspired greatly by jazz flautist, Hubert Laws. That creativity comes alive in the descant that Michael composed for the coda (ending) section of “Jesu Joy of Man’s Desiring/I Surrender All.”

Michael Taylor demonstrates versatility: in genre, from classical to show tunes; and in the ability to play other woodwinds. As such, he also studied briefly with a flautist from the Boston Symphony Orchestra. Michael never misses an opportunity to share his ministry and has ‘given back’ by inspiring young musicians in Bermuda.

Be the first to review “Classical-Hymn Suite CD” Cancel reply