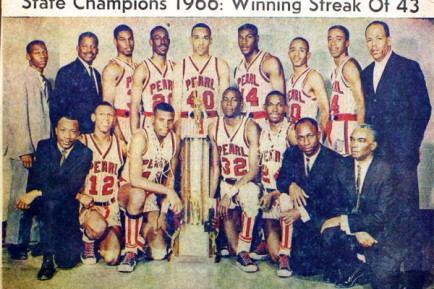 This biography is about Coach Cornelius Ridley, head basketball coach, and the Pearl High Tigers. This book covers the first half of Coach Ridley’s career (1960-1969). First Half highlights the centerpiece of Pearl’s history, which was made by the 1965-66 basketball team. This team won the TSSAA State Championship — the first year they were allowed to play in it. The cover photo depicts the Tigers’ 63-54 victory.

The book describes how this was a victory, not only for the Tigers and Coach Ridley, but also for the entire Nashville community. From that point, Tennessee High School Sports became fully integrated. Tennessee’s High Schools followed suit, abandoning the segregationist practices of the Deep South. Nashville, Tennessee’s High School sports set a precedent, being the first to integrate voluntarily, rather than by court order. This was the height of Coach Ridley’s Basketball Glory.